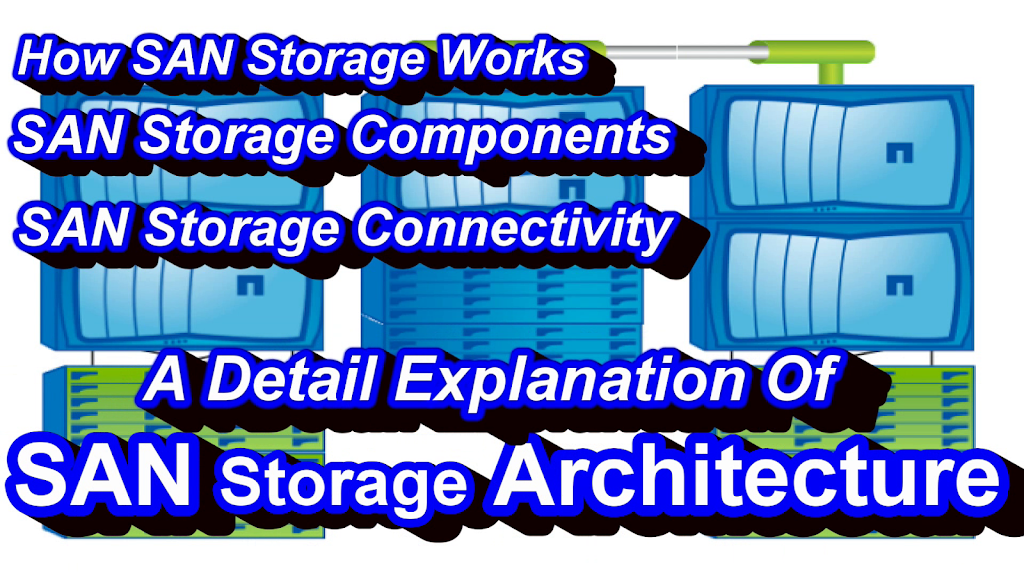 This blog explains What is SAN storage how it works. What are the various SAN components and how they connect to each other? This post is helpful for storage-admin to understand the basics of SAN architecture.

What is SAN Storage?

SAN stands for Storage Area Network. A SAN is a specialized high‐speed network of storage devices and FC switches connected to Host or Server via Fiber optic cables.

Host uses the storage from storage arrays as if its local to Host. As the data communication happens via fiber optics the data speed is high in comparison to NAS storage.

SAN Components can be divided into 3 layers. Host, Fabric and Storage Layer. These three layers connect to each other and form a Storage Area Network Each layer has its own functions.

We will discuss their function in the coming section.

Below is a very simple architecture diagram of a Storage Area Network.

The host layer of SAN Storage has servers or hosts. Hosts are basically hardware having its own resources like CPU, Memory, Disk storage and an Operating system running on it.

Along with these, it has also dual HBA card which connects to the Fabric Layer of SAN Network.

What is SAN Fabric

The fabric consists of one or more FC SAN switches. SAN Switch provides connections between devices in SAN architecture. All Host and storage array connects to the same FC switch. Thus it acts as a mediator between Host and Storage.

Typical SAN network has two fabric for high redundancy. If one Fabric goes down then other fabric takes care of the data flows in the storage area network.

In this layer, storage arrays are the important hardware where data resides in physical disks. Storage Array consist of physical disk. A logical grouping of the physical disk is called the RAID group. A storage admin assigns a RIAD type that protects the data in case of disk failure.

Below is an architecture diagram of a typical Storage Area Network that has all hardware components with redundancy.

When a host from a host layer wants to access a storage device, it sends out a block‐based access request for the storage device. SCSI commands are encapsulated into FC packets. Then the Host HBA transmits the FC request to the Storage layer via Fabric.

From the Fabric layer, SAN Switch then sends this request to the Array. In Storage Array, SP receives the request, processes it and then sends an acknowledgment back to the host through the same path.